Update #3: There's a new version of the ChrUbuntu script that offers much more flexibility. Be sure to check out my latest post at ChrUbuntu: One Script to Rule them All!

Update #2: I've updated the script so that module loading works with beta and dev channel Chrome OS kernels. If you were on beta or dev channel and ChrUbuntu booted but you couldn't connect to WiFi/ethernet, try now. Thanks to not-so-lazy commenter "The Lazy Husband" for the pointer and fix. I've also added a possible fix for some people getting out of space errors. The script below now works with external USB Flash and SD Card ChrUbuntu installs.

Update: Instructions for installing to an external USB or SD Card are up!

Thanks to those who donated to the project, I'm excited to announce the first alpha release of ChrUbuntu 12.04 for the new Google Chromebook with ARM processor! This is an alpha release meaning there's a good bit of stuff that doesn't work yet. Known issues include:

What works:
Installing ChrUbuntu on a new Chromebook is extremely easy, just follow the steps below.
Thanks again to all the donors! We'll keep working to make ChrUbuntu a great and fun experiment on Chrome hardware!
Posted by Jay at Monday, October 29, 2012 331 comments:

I've got an Ubuntu rootfs booted. I need to get networking up and running so I can install packages and work towards a graphical desktop. We'll get there! 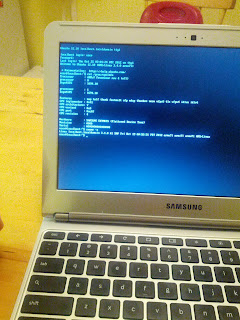 ChrUbuntu on the ARM-based Chromebook: Let's Do This!

Update: We made it! Thanks to all who donated!

By now, you've probably seen that Google has announced a new $249 Chromebook and if you're reading this blog, no doubt you also know that unlike other Chromebooks, this one is based off of an ARM processor. That means these Chromebooks definitely will not work out of box with my ChrUbuntu 12.04 instructions which assume an x86 Intel processor.

However, I'm fairly confident that Ubuntu will run on these ARM based Chromebooks with a tad bit of work and some Google employees seem to agree with me. I can't really justify purchasing a new Chromebook since at last count, we have 5 Chrome OS devices in the house but I do want to see ChrUbuntu running on these units also. So I'm starting a ChrUbuntu on ARM-based Chromebooks campaign. Here's how it works:


If you're still reading, you can donate to the campaign here (goal reached, link removed, please stop giving me money).
Posted by Jay at Friday, October 19, 2012 2 comments:

As part of my job, I often want to be able to demo Chrome OS to clients so that they can see how simple it is or to show them a concept such as enterprise enrollment. However, since Chromebooks aren't compatible with common screen-sharing applications like GoToMeeting.com or WebEx, it's not possible. Google+ Hangouts do work on Chrome OS but you have to have a user logged into the Chromebook, no demoing the login screen or enrollment process.

So I set out to find a way to run Chrome OS (the official code) on a virtual machine. Even before Chromebook hardware was available, Chromium OS, the open source base for Chrome OS has been able to run on virtual machines (see Hexxeh's nice nightly builds) but I didn't want to deal with the rabbit trail of Chromium OS vs. Chrome OS when presenting to clients, I wanted them to see exactly what they'd see on a Chromebook. So with a little scripting, I've managed to get Chrome OS running on VMWare workstation (should work on VMWare Player and Fusion also though I haven't tested). Here are the instructions:

Disclaimer: None of this is official or supported. I'm not responsible if Chrome or Chromium OS breaks your physical or virtual machine, destroys your data or re-elects Obama. The risk is entirely your own.


Gotchas
Good luck and post in the comments how Chrome OS works in a VM for you!
Posted by Jay at Thursday, October 11, 2012 107 comments: