Are you a fish or a pony?

Update: I finally got up the courage to pop the case off my Cr-48 Fish. Below is an image of the motherboard with the bottom covering laying over top of it. Note the white sticker at the bottom left which is under the motherboard directly underneath the RAM slot. It says Rev: 2.00. Every disassembled Pony I can find on the Internet is Rev: 1.00. It looks like Fish have a revised motherboard. No idea what's changed still but it may be something pretty low level with the board schematics or electrical which would explain why Google is able to use the same Chrome OS image for the Pony and the Fish. It will be interesting to see if the next wave of Cr-48s going out are primarily Fish... 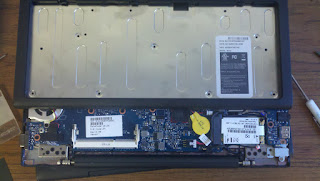 Update: So far we've had 68 responses to the survey and the results are overwhelmingly pony with just 5 respondents having a fish. Of those 5 fish, there doesn't seem to be any pattern in the results, one arrived as early as 12/10 another as late as 12/23. 4 were to mid-East Coast states but one was shipped to CA. Three respondents think they made a good test case for the Cr-48 but 2 think they just got lucky. You can see the raw data from the survey here. What do you think the difference is between a Pony and a Fish? Keep those conspiracy theories coming!

It seems there are two versions of the Cr-48 hardware. Some Cr-48s are labelled "IEC MARIO PONY 6101" and others "IEC MARIO FISH 2330". As far as I'm aware though, no one knows what the difference between the two models is. Google offers the same recovery image for both versions. So I'm conducting a short, 100% non-scientific survey to see what we can learn about the Cr-48s that are out there. If you have any thoughts as to what the difference between the two models might be, be sure to share in the comments section. By the way, you'll notice I feature a Amazon.com product in each post. These products should be compatible with the Cr-48 and purchasing via this link supports this blog. Don't have WiFi at home/work and 100mb 3G not enough? The Wii USB adapter works with the Cr-48 to give you cheap/fast ethernet connectivity!
Posted by Jay Lee at Wednesday, January 12, 2011